Glass Courses in Istanbul, May 20 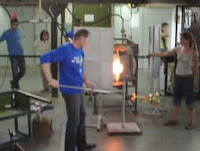 The Glass Furnace is helding a course on glassblowing in Istanbul between May 20th - June 2nd, focusing on the exploration of non-traditional glassblowing methods, a survey of techniques not usually included in most glassblowing classes, and concentrating on technical aspects such as "the perfect bubble".
Posted by allaboutturkey at 6:33 PM No comments:

Turkey's first Climate Change Congress (TIKDEK 2007) will be held in Istanbul Technical University (ITU) between April 11th-13th, 2007. The congress is organized by the Water Foundation who is planning to bring together scholars and experts from various Turkish institutions to study climate change.
Posted by allaboutturkey at 6:30 PM No comments:

The 38th Convention of The Mediterranean Science Commission will be held in Istanbul between April 9th-13th. The congress will be officially opened by Prince Albert II of Monaco. Over a thosand scientists from 40 countries will participate in the congress, which will cover impact of global warming on the world seas. High rank EU executives are also expected to attend the congress.
Posted by allaboutturkey at 6:24 PM No comments:

The 26th International Istanbul Film Festival will be held between March 31st and April 15th. The festival will open its gates with famous Turkish director Ferzan Ozpetek's latest movie "Saturno Contro". This year, 235 films will be shown and 15 films will run for the "Golden Tulip" award under the theme "Arts and Cinema". The famous director of such independent hits - Johnny Suede, Living in Oblivion and The Real Blonde - Tom DiCillo will compete for the "Golden Tulip" with his latest film "Delirious". Among the films competing for the "Golden Tulip" Award in 2007 are George Hickenlooper's "Factory Girl" starring Sienna Miller, Guy Pearce and Hayden Christensen and Joachim Trier's "Reprise".
Posted by allaboutturkey at 6:02 PM No comments:

International Motorcycle Fair will be held between March 29th - April 1st, 2007, at Istanbul Fair Center in Yesilkoy - Istanbul. The Motoshow 2007 will be a meeting point of the speed addicts. The brand new models of motorcycles of all types from chopper to racing, from touring to enduro that have been produced by the leading brands of motorcycle sector will be exhibited in the fair.
Posted by allaboutturkey at 6:00 PM No comments:

One of the most innovative and creative jazz musicians of the world, and three time Grammy winner, Branford Marsalis, will join "Masters of the Jazz" series at Is Sanat Cultural center in Istanbul on Wednesday March 21st. Marsalis is nominated for the 2007 Grammy Award in the "Best Solo Instrumental Jazz Album" Category as well.
Posted by allaboutturkey at 5:59 PM No comments:

Pink Martini will be on stage at Turker Inanoglu Maslak Show Center in Istanbul on March 17th. The group has a big number of fans in Turkey where they'll sing the new songs from their new album that is going to be released in May in Europe.
Posted by allaboutturkey at 5:58 PM No comments: